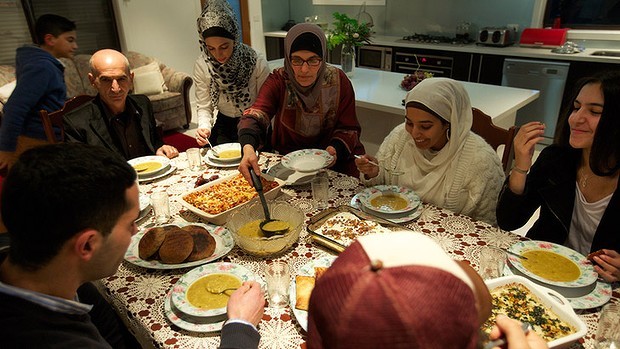 Downers Grove, IL – Masoud Rahmnan kept turning down offers of turkey at his daughter’s house on Thursday, as he remained suspicious of his new son-in-law’s practices and convictions towards the Islamic faith.

“I’m not saying it’s not Zabiha, but one must take precaution in every aspect of life, especially if your blonde-haired, blue eyed son-in-law with a brown fetish is trying to stuff turkey down your throat,” said the 54-year-old resident of Naperville.

Masoud’s daughter, Aisha Rahman-MacDonald, tried to calm her father’s nerves by offering up some left over samosas from the fridge.

“Ever since I got married to John, it’s been like this,” said Rahman-MacDonald, a 27-year-old accountant in the financial industry. “He’s been suspicious of John’s intentions, saying that his conversion to Islam was a ruse to marry me… And that I should never trust his turkeys.”

“I watched him at the masjid last week,” said Masoud as he chewed on the week-old samosa from his daughter’s fridge. “Right before he did wudu, he looked around to see if anyone was watching. Then he just threw some water on his face, went to the parking lot, got in his car and left! I suspect he had to run to Costco to pick up his “Zabiha” turkey.”

“His sala’ah is worse than a Muslim praying in a Hollywood movie. Who does 30 consecutives sujoods (prostrations) in one prayer?!?”

As the Thanksgiving dinner drew to an end, Rahman could be seen observing his son-in-law’s every move, whilst muttering astaghfars.