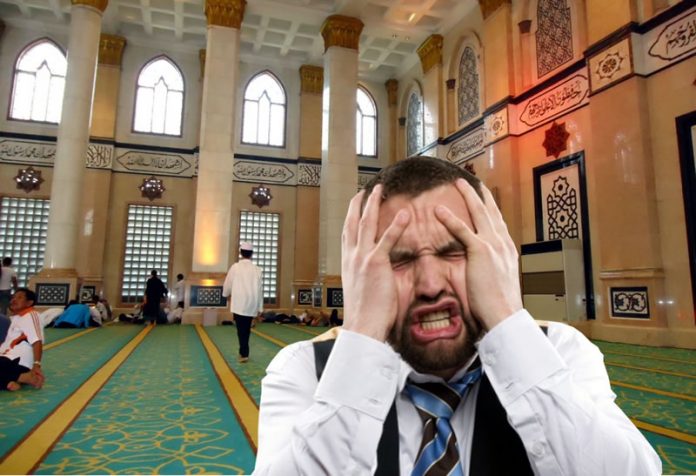 Local mosque-goers are complaining about an increasingly irritable man hovering around their mosque. The man, identified as 27-year-old Haroun Khaleel, has been handing out anti-voting flyers for the past month and the situation appears to be deteriorating.

“I get where he’s coming from. Muslims face tremendous difficulty navigating the nuances of the political spectrum,” stated a friend and fellow congregant. “But this guys, like, hissing at people and stuff. It’s getting ugly.”

According to others, Khaleel routinely double parks by anyone with a political bumper sticker on their car and allegedly berated an 8-year-old wearing a Obama “Hope” t-shirt during last Friday’s prayer service. He also plans to hand out “I Didn’t Vote” stickers on Election Tuesday.

“The political system is fundamentally haram!” shouted Khaleel at a group of teenage girls leaving the mosque. “It doesn’t matter who gets elected. They’re all criminals!”

Eyewitnesses claim the man, whose strong opinions are honestly like fingernails on a chalkboard, has also been ejected from early voting facilities “a dozen or so” times after repeatedly obstructing Muslim voters.